Over the past year ÉireComposites and ATG Innovation Ltd have partnered in a R&D project aimed at the development and maturation of grid stiffened and lattice composite structures.

This activity was made possible through funding from Enterprise Ireland with technical requirements and oversight from the European Space Agency ESTEC office.

The lattice structure in this case is comprised of continuous carbon fibre tows arranged in an overlapping fashion to create the pattern seen in the image above. The resulting structure is both high performing and extremely lightweight while at the same time capable of providing a 30% reduction in terms of part cost. While reducing cost, the lattice and grid-stiffened architecture can provide up to 35% mass reduction compared to sandwich structures.

The project coordinator, ATG Europe, have developed and patented a manufacturing technology for unidirectional pre-preg grid-stiffened and lattice composite structures for application in the space, aviation and industrial domains. A series of proprietary interface concepts for attachments and end zones have been developed and patented too. The design and analysis of the parts and overall coordination of the project was done from ATG Europe’s new office in Galway (ATG Innovation Ltd). 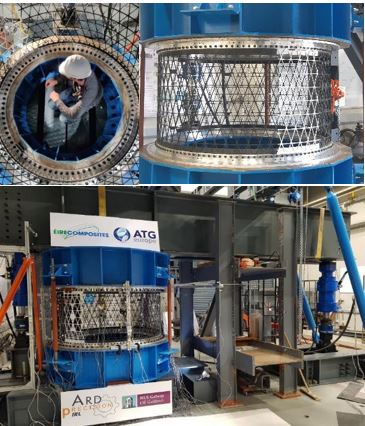 The manufacture and subscale testing were carried out in ÉireComposites 6000m² facility in Inverin, Galway with testing support provided by ÉireComposites’ subsidiary company CTL. The manufacturing process builds on ÉireComposites’ extensive experience form previous ESA and H2020 projects and followed the manufacturing method developed in ATG which uses pre-preg carbon fibre tapes hand laid up onto a mandrel and cured in an autoclave. The use of uninterrupted thermoset pre-preg tows allows for high volume fraction components (60-65%) thus increasing the weight saving opportunities of the technology while not compromising on performance.

The project has culminated in the structural testing of a 1.5m diameter lattice cylinder manufactured from carbon fibre composite. This structure is representative of a full-scale satellite central tube. The composite component weighed just short of 10kg but was able to withstand 17,000kg of compression force which was applied using a specially made test fixture which was designed and commissioned by ÉireComposites and manufactured by ARD Precision Ltd in Galway.

The structure was manufactured using the Toray Advanced Composites RS36 epoxy prepreg system, in unidirectional carbon fibre tape. Established as a material for space applications, this resulted in an impressive performance whilst also ensuring the required material outgassing characteristics for the component.

The test itself was carried out with the support of NUI Galway’s heavy structures laboratory. The laboratory features a large hardened floor with attachment points which allowed the test frame to be secured. Two actuators (250kN and 500kN) were attached to the test frame in order to apply the required loads to the cylinder. A team of Engineers and technicians from NUI Galway assisted in the test setup and instrumentation. This included the use of a Digital Image Correlation (DIC) system which uses video cameras to track points on the structure allowing for highly accurate 3-dimensional measurements of the deformation of the cylinder during testing.

The testing was completed in May of 2019. Multiple structural tests were performed, and the cylinder behaved as predicted, paving the way for further research projects which aim to bring this technology closer to spaceflight.

We use cookies on our website to give you the most relevant experience by remembering your preferences and repeat visits. By clicking “Accept All”, you consent to the use of ALL the cookies. However, you may visit "Cookie Settings" to provide a controlled consent.
Cookie SettingsAccept All
Manage consent

This website uses cookies to improve your experience while you navigate through the website. Out of these, the cookies that are categorized as necessary are stored on your browser as they are essential for the working of basic functionalities of the website. We also use third-party cookies that help us analyze and understand how you use this website. These cookies will be stored in your browser only with your consent. You also have the option to opt-out of these cookies. But opting out of some of these cookies may affect your browsing experience.
Necessary Always Enabled
Necessary cookies are absolutely essential for the website to function properly. This category only includes cookies that ensures basic functionalities and security features of the website. These cookies do not store any personal information.
Non-necessary
Any cookies that may not be particularly necessary for the website to function and is used specifically to collect user personal data via analytics, ads, other embedded contents are termed as non-necessary cookies. It is mandatory to procure user consent prior to running these cookies on your website.
SAVE & ACCEPT
Translate »